skip to main | skip to sidebar

In life things sometimes move a lot faster than you expect. When I started this little company I thought I would be supplying inner Copenhagen with a few kegs every other month, but things have a way of playing tricks on you.

Shortly after the festival I got in contact with Brill (Swedish Importer) and after a few emails we agreed upon sending a pallet of 30 kegs to Sweden. Today it will be picked up from Nørrebro and will soon be hitting a lot of different pubs all over Sweden. This is a fantastic opportunity to reach a larger audience. Lets just hope that the Swedes will appreciate the fruits of my hard labour.

In other news I have a new beer that is hitting both Denmark and Sweden. It is called Summer Breeze and is a 4,7% ABV American Pale Ale. The concept is a low alcohol beer that has loads of aromatic hops, but a low alcohol level and fermented dry with no caramel malts. So it is a summer beer, but with a bit more ula-la.

At Nørrebro I have brewed a kellerbier which I intend to dry hop with even more fresh German hops. German hops are used all to seldom in modern brewing and this is a more modern interpretation of this classic.

For Croocked Moon I will be brewing an American lager (Aggressively hoped, obliviously) and in fond memory of my predecessor, Mr. E. Hill, I will try my luck with a black IPA.

All in all… So many thoughts and so little time. I think my thesis would appreciate some attention too, but more on that later. 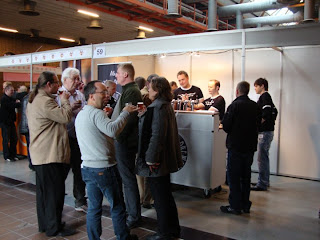 The stand just when the festival opened.

After years of walking the floors and helping out at the Copenhagen Beer Festival I finally realized my dream of having my own brand and my own stand. Over the weekend I have served several thousand samples of the five different varieties of beer.
The attention was overwhelming and by nine o'clock on Saturday I found myself all out of beer. All types of people stopped by: From RateBeerians and beer bar aficionados to beer novices and importers. Many of the products that was served where leftovers from earlier batches that sold out long ago which was only brought to showcase the different styles that I have brewed.
The two new beers that premiered on the festival was Hop Drop IPA which is an aggressive American style IPA and Dark Temptation which is a malty imperial porter. Several importers from Sweden came by and all displayed interest in importing the beers. Business cards were exchanged and hopefully before long, Croocked Moon will be invading bars around Sweden.
The positive feedback has put a lot of things into perspective. It seems that the demand for the brand is there to start considering a form of expansion since the beer sells out on the day it is put on the market. I might also need to start thinking about bottling some of the beers in order to reach more consumers on a larger scale. This expansion in production requires help from other breweries that has a bottling line and the capacity to brew the beer. These are all things I will need to consider over the next couple of weeks.
Next week I will deliver Dark Temptation and Hop Drop to Ølbaren, Ørsted, Lord Nelson and maybe Plan B. Next beer coming up is a light and dry American Pale Ale called Summer Breeze at 4,7% ABV. No caramel, lots of late hopping for more aroma, and it is fermented bone dry. Summer Breeze will function as a summer beer that packs the flavour but holds back on the alcohol. The festival has brought great inspiration for new brews, but more on this later....
Last, but not least I want to thank all the people who came by the stand and tried the beer, and the amazing people who volunteered to bartend for me!
/Søren